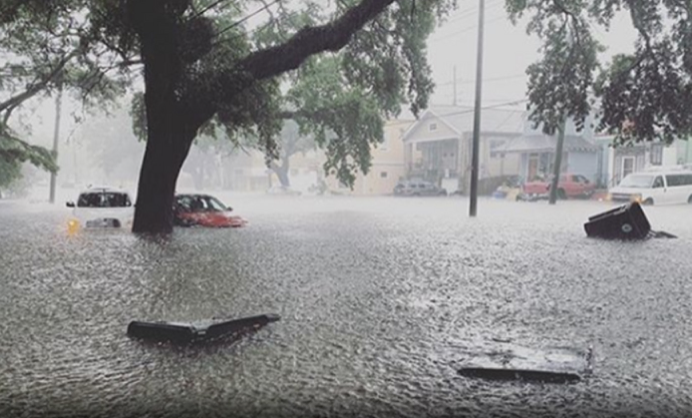 With New Orleans already under water from 10 inches of rain and a rapidly developing tropical storm getting ready to strike, Mercy Chefs is pre-deploying resources and staff to the region beginning TOMORROW in anticipation of a FULL DEPLOYMENT by the weekend.

If you've been watching the news then you know that New Orleans and the entire region is already facing major flooding from immense amounts of rain that have fallen over the past 72 hours. Now, a storm that began as a somewhat ordinary low pressure center in Tennessee before coming down across the Gulf yesterday, has continued to intensify along the Louisiana/Mississippi border.

Meteorologists fully expect this storm to develop into Tropical Storm Barry and then likely Hurricane Barry by the weekend. The combination of the flooding already in place and this developing storm could cause phenomenal flooding like we saw in Baton Rouge three years ago, or in Houston after Harvey.

The pictures coming out of New Orleans are bringing back the painful memories of Katrina. The French Quarter is once again under water. Bus and street car service have been suspended. Officials are closing the flood gates today, which can help keep the river water out but also traps the rainfall in! It disturbs me to the very core of my soul that this very threatening storm hasn't even hit yet and the streets are already flooded.

+ + I will be on the ground tomorrow

Ann and I will be pre-staging our Mercy Chefs team in East Texas, ready to move our "Mercy One" mobile kitchen into position wherever it is needed most. The likely worst strike zone extends from the southeast Texas coast back to Louisiana and Mississippi. We are also bracing for the potential of devastating inland flooding into Oklahoma as this massive rainmaker comes back ashore.

With a full deployment IMMINENT, I'm asking for your help. This is an absolutely critical time. We must commit resources and staffing well in advance of the full deployment in order to maximize our impact once we are staged at "ground zero" of the strike.

Will you partner with me TODAY by making your most generous, tax-deductible gift to help our team pre-deploy in advance of this storm that could catch millions off guard? Go here to make your gift to help us here and with other vital efforts:

In 13 years of disaster relief, I don't ever recall a tropical storm or hurricane of consequence this early in the season. And I've never seen a storm start so far inland before returning to the open water and gaining so much strength. Also, it now appears that the west side of the storm is most threatening, which again is unusual and puts the target zone in even more danger.

This storm could be one of the biggest shockers we have seen because of its timing and unusual path. Thanks in advance or your prayers and financial support.

P.S. Soon-to-be "hurricane" Barry could prove to be one of the most surprising and damaging storms we have seen -- especially with New Orleans and surrounding regions already under water. We are moving staff, resources, and our "Mercy One" mobile kitchen to the region. Please help. Go here: