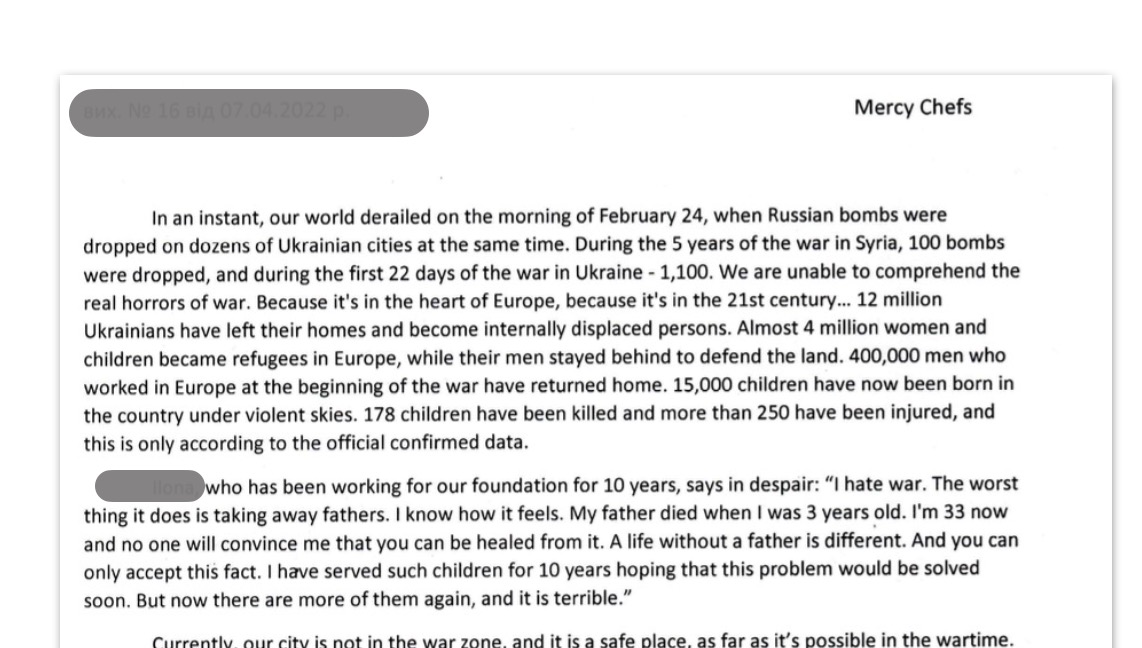 We received this letter from one of our partners working inside Ukraine to distribute relief to those on the front lines of this war. What is happening in Ukraine is heartbreaking. Yet in the midst of the tragedy of war, people around the world are standing together to help those who are hurting. Thank you for helping to make it possible for Mercy Chefs to distribute more than 1.25 million pounds of food and supples inside Ukraine.

In an instant, our world derailed on the morning of February 24, when Russian bombs were dropped on dozens of Ukrainian cities at the same time. During the 5 years of the war in Syria, 100 bombs were dropped, and during the first 22 days of the war in Ukraine -- 1,100. We were unable to comprehend the real horrors of war. Because it's in the heart of Europe, because it's in the 21st century... 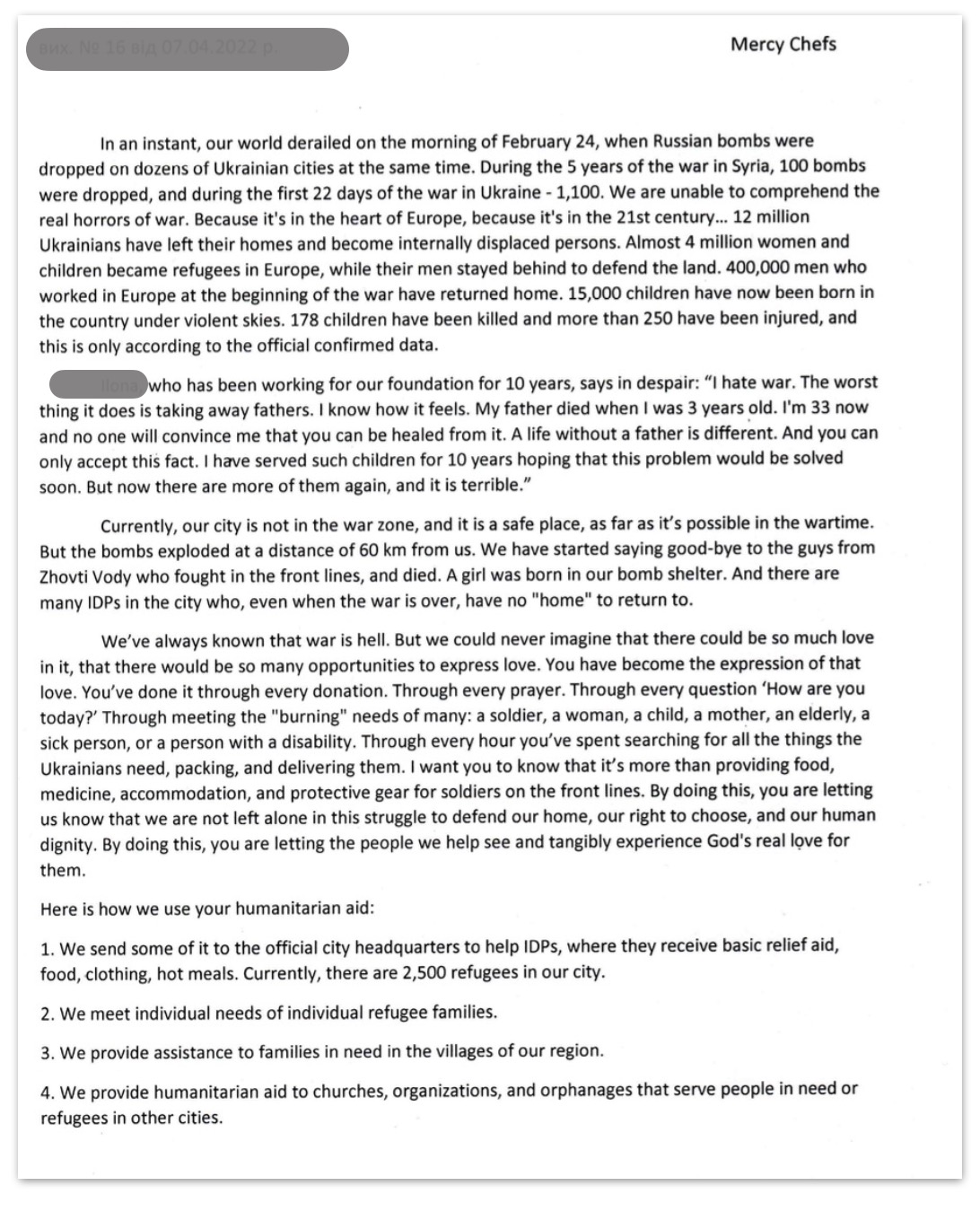 12 million Ukrainians have left their homes and become internally displaced persons. Almost 4 million women and children became refugees in Europe, while their men stayed behind to defend the land. 400,000 men who worked in Europe at the beginning of the war have returned home. 15,000 children have now been born in the country under violent skies. 178 children have been killed and more than 250 have been injured, and this is only according to the official confirmed data.

[A person] who as been working for our organization for 10 years, says in despair:

"I hate war. The worst thing it does is taking away fathers. I know how it feels. My father died when I was 3 years old. I'm 33 now and no one will convince me that you can be healed from it. A life without a father is different. And you can only accept this fact. I have served such children for 10 years hoping that this problem would be solved soon. But now there are more of them again, and it is terrible."

Currently, our city is not in the war zone, and it is a safe place, as far as it's possible in the wartime. But the bombs exploded at a distance of 60km from us. We have started saying good-bye to the guys from [city] who fought in the front lines, and died. A girl was born in our bomb shelter. And there are many IDPs in the city who, even when the war is over, have no "home" to return to.

We've always known that war is hell. But we could never imagine that there could be so much love in it, that there would be so many opportunities to express love. You have become the expression of that love. You've done it through every donation. Through every prayer. Through every question, "How are you today?" Through meeting the "burning" needs of many: a soldier, a woman, a child, a mother, an elderly, a sick person, or a person with a disability. Through every hour you've spent searching for all the things the Ukrainians need, packing, and delivering them. I want you to. know that it's more than providing food, medicine, accommodation, and protective gear for soldiers on the front lines. By doing this, you are letting us know that we are not left alone in this struggle to defend our home, our right to choose, and our human dignity. By doing this, you are letting the people we help see and tangible experience God's real love for them.

Here is how we use your humanitarian aid:

Here is what people who we've served say:

"We thought everyone had forgotten us, but we are not forgotten" -- an elderly man, 78 years old, Myrne village

"We feel your warmth because of your help" - refugees from Kharkiv, a mother and her 3 children

"Never in my life have I asked for help. Moreover, I have felt ashamed to accept it, but now is the time that it is impossible [to survive] without it" -- refugees from Chernihiv, a boy, his mother, and his grandmother

"What a miracle! Yesterday there was nothing, and today there is food to cook with" -- refugees from Severodonestk, a mother and her 3 children.

We are infinitely grateful to you!