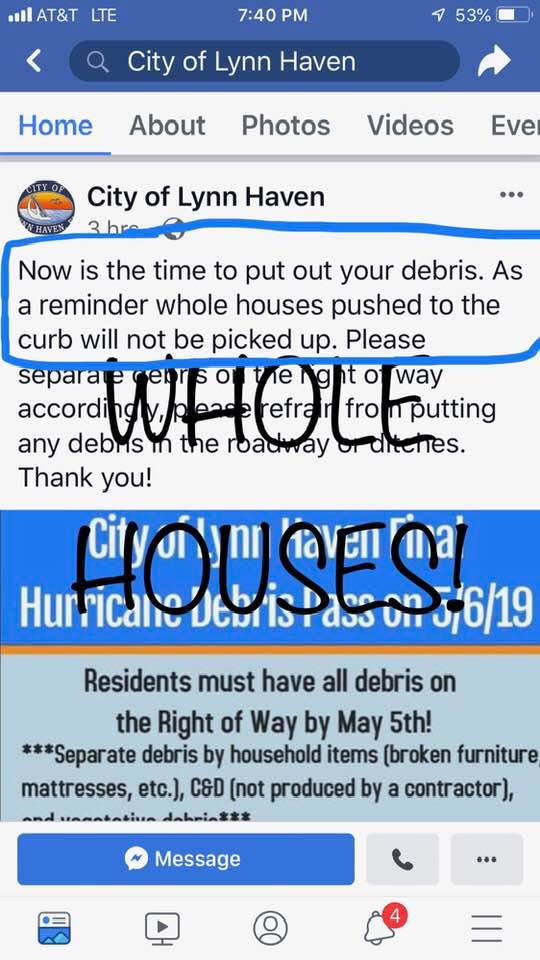 Please share this with your friends. We must get the word out on the ongoing crisis on the Florida Panhandle! -- Gary

On Monday, the city of Lynn Haven (which neighbors Panama City to the north) made this post on its official Facebook page:

"Now is the time to put out your debris. As a reminder whole houses pushed to the curb will not be picked up.
Please separate debris on the right of way accordingly, please refrain from putting any debris in the roadway or ditches. Thank you!"

It's almost unimaginable that, six months after the hurricane hit, city officials are still sending a "reminder" that "whole houses pushed to the curb" would not be picked up by the debris removal team! This demonstrates the level of the crisis going on right now in Panama City and surrounding communities.

The mayor of Panama City just posted a video noting that their teams have already picked up 31 MILLION cubic yards of debris -- and the work is not nearly done. Panama City alone lost 1 million trees! And the housing crisis has been overwhelming -- 100,000 people signed up for help from FEMA but only 1,000 trailers were sent.

And the most critical victims are the children -- an estimated 5,000 kids displaced from their homes and now facing a long summer without access to regular meals.

Here is the hard truth -- thousands of people on the Florida Panhandle are still MONTHS away from being restored to their homes. But somehow, the fourth largest hurricane in U.S. history has been all-but forgotten by Congress and fell off the media's radar just days after the storm hit.

A local pastor shared his plight recently. He said his home is "completely gutted" and knows he's still "at least six months out" from any return to normal for his family. But he wonders, "Or will it be longer? Who can tell anymore." Yet he is hopeful that if the word spreads, the great compassion of this nation will rise up and help...

"My hope is that now, at the six-month mark, people will again become aware that the needs here in the Florida Panhandle are great. I believe the people who cared six months ago still care today. I believe if they know there is a need, they will still do what they can to help."

This is why we're going back. This is why we're establishing a "Beacon Of Hope" center that will distribute thousands of meals to children left homeless by the storm and other hurricane victims. But I must get our staff mobilized in the next two weeks to prepare the facilities.

If you already helped, THANK YOU! If not, please prayerfully consider going here to make a special tax-deductible gift today.

Thank you for your prayers and for your financial support!